"You say Armagh, and I see the hill with the two tall spires or the square low tower; the faith of Patrick is with us still; his blessing falls in a moonlight hour, when the apple orchards are all in flower." 'Ulster Names', John Hewitt

After the destruction of Navan, the centre of influence moved to the present site of Armagh, probably in the 5th century AD.  In this century, also, following his conversion of the King to Christianity, St Patrick founded his first church in Armagh.

Armagh remains the Ecclesiastical capital of Ireland and the skyline is dominated by the 2 outstanding Cathedrals, one Church of Ireland and one Roman Catholic.

St Patrick’s College had been established as a junior seminary by Archbishop Crolly in 1838 and still stands on the sandy hill to this day.

Former pupils of the College including poets John Montague and Paul Muldoon.

Montague recalled his boyhood time at the College in his book ‘Time In Armagh’ although his feelings on the place were not always happy ones!

Montague returned to Armagh to launch the Book at Navan Fort.  As a thank you for facilitating the launch, Montague gifted Anne Hart a signed copy of the essay ‘The History Walk’ and a copy of the book signed,

“For Anne Hart, who played her part, in bringing my return about; with many thanks, John”

Patrick and the Saints of Ireland are entwined in the poems, songs & performances of The Armagh Rhymers.

Saints Patrick, Brigid & Colmcille are all represented in our cosutmes, Patrick in his traditional green, Brigid with her famous cross and Colmcille represented by the Heron. 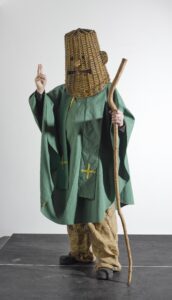 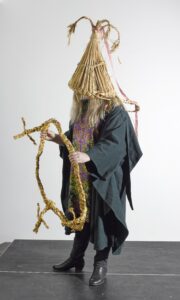 CLICK HERE to find out how you can book an Armagh Rhymers performance.